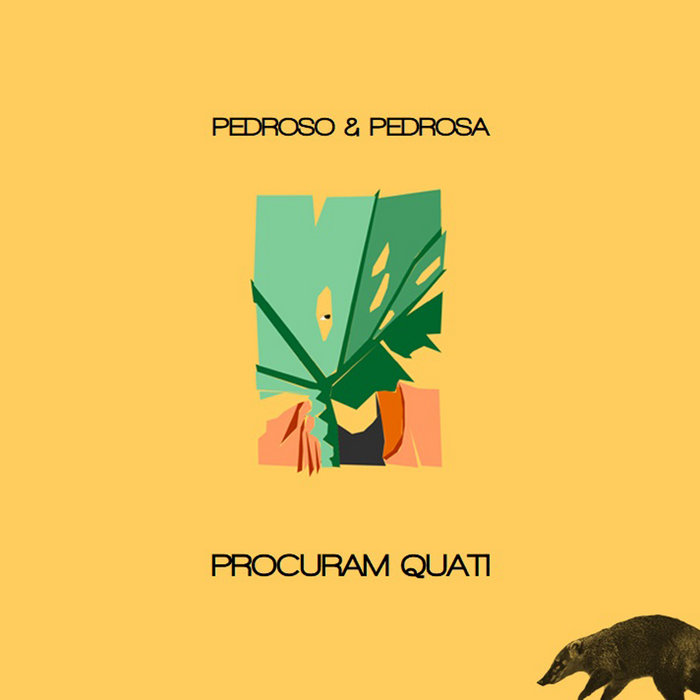 October 9, 2020: Pedroso & Pedrosa are Rafael de Toledo Pedroso (they/them, he/him) and Pedro Pedrosa (he/him) and are from Paraná and Rio de Janeiro. Procuram Quati (Searching Coati in its literal translation) is the first album from the duo Pedroso & Pedrosa, a genre-defying work that fuses elements of popular Brazilian music with avant-garde electronic experimentation. The album follows a loose narrative from night to day as the duo search for the local animal known as the Coati.  Procuram Quati combines a blending of rhythms and lyrics in their own unique way while painting a colorful and mournful landscape filled with tales of blind optimism and futuristic Brazilian atmospheres.

And the journey ends here. Pedroso & Pedrosa (weird Brazilian duo) finally grabbed the Quati (Coati) by its tail and then—

Procuram Quati has different rhythms, genres and it never stays put, always looking out for the Quati. The duo goes on a colorful and mournful journey singing tales about blind optimism while fusing experimental electronic music with popular Brazilian sounds. An authentic instrumentation takes care of the atmosphere filled with synthesizers, ukuleles, bongos, congas, recorders, turntables and more.

The album follows a very loose narrative from night to day, searching the Quati everywhere they could. The duo focused on different methods for each song resulting in them sounding unique and diverse. Each track ends up being its own universe.

Pedroso & Pedrosa are Pedro Pedrosa and Rafael de Toledo Pedroso, two Brazilian friends that met in 2007. They reconnected in 2020 and formed the Pedroso & Pedrosa duo and also started a radio show that is currently broadcasted by Radio On Berlin. In addition, they started producing this album, as well as other music, and are currently still searching for the Coati. I mean Quati. Have you seen it?''

Artist receives 75% of all proceeds of digital only sales. The remaining 25% supports Grimalkin's label and mutual aid fund and helps us towards sustaining our work.

Tapes proceeds go to ANF (Agência de Notícias das Favelas). ANF is an independent news vehicle that was turned into an NGO that produces newspapers, events and other cultural products made exclusively by people that live in favelas. The people who live there rely mainly on their weekly newspaper A Voz da Favela (the Voice of the Favela), which is sold on the streets by an open price (you can pay what you want). P&P feel it's an important organization because the biggest corporation Brazilian News Agency are very conservative and with ideals based on many kinds of racial and social discrimination. It's very difficult for an independent newspaper to reach as many people as 'A Voz da Favela' does, and ANF helps spread the word about what happens in these places from the perspective of those who live there.The newspaper itself is sold mainly in Rio de Janeiro, but the online version has collaborators from other favelas from other states. And now, with the pandemic, they can't sell their newspaper on the streets anymore and are in dire need of donations.
www.anf.org.br

Lathe proceeds go back to our label and mutual aid fund.

Pedroso and Pedrosa wanna thank all these lovely people that helped us to keep our sanity intact (sort of) during the process of making this Record:

Huge thanks to Truck and Secret Wine Press for premiering this album for us: secretwinepress.com/album-review-procuram-quati

Huge thanks to Ryan and Pastel Wasteland for premiering the first single and video for Maus Lençóis and the pre-order:
pastelwasteland.com/music/pedroso-pedrosa-maus-lencois-premiere-%f0%9f%87%a7%f0%9f%87%b7/

Huge thanks to Louis and MEFD for including this release in their best of weekly round up: www.mesenceintesfontdefaut.com/2020/10/11/coups-de-coeur-11octobre/

Huge thanks to Tyler and Cat Scratch Vinyl for this kind review: www.catscratchvinyl.com/pedroso-pedrosa-procuram-quati-album-review/

Huge thanks to Yeah I Know It Sucks for this kind review: yeahiknowitsucks.wordpress.com/2020/10/14/pedroso-pedrosa-procuram-quati/

Huge thanks to Audrey and Slug Mag for this very kind review: www.slugmag.com/music/reviews-music/national-music-reviews/pedroso-pedrosa-procuram-quati/

Huge thanks to Joe Osborne at Sounds and Colours for covering this album and doing an interview with P&P: soundsandcolours.com/articles/brazil/pedroso-pedrosa-searching-for-a-new-language-55667/

Bandcamp Daily  your guide to the world of Bandcamp

New sounds from Mavi, Ivy Sole & Moderator, plus AJ, the One joins the show, for her latest release